So I finally got round to going through the years of correspondence — hundreds of emails — that I’ve had through this site’s contact form. It was quite fascinating to see how the figures came out, and occasionally funny: 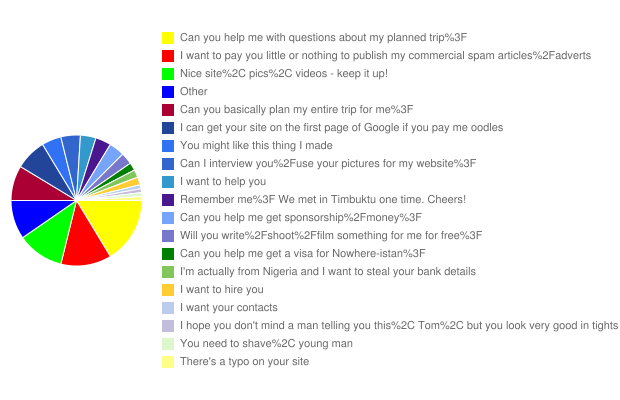 A large proportion of messages were from people who wanted advice on various aspects of a cycle tour. Most of the answers were things I learnt after I’d left, so the best advice I could have given was simply to leave, and go through the same learning process — far more valuable than hearsay from someone else’s point of view.

But I know from experience that people — especially in the planning stages of a long trip — are really looking for reassurance of their doubts and fears. With that in mind, I wrote many articles over the last few months — partly with the aim of giving out a bit of advice on bike-building, finance, sponsorship, wild-camping, filming, and other topics, and partly just to let people know how easy it really is to have a long, meandering bicycle adventure.

As such, almost every question I get regarding actually planning a bike trip is answered in the free bike tour planning resources section. Check it out!

Travel blogging direct from the road, on your backpacking/walking/cycling/skateboarding/unicycling trip, is not only a realistic ambition: with today’s technology it’s also a piece of cake and costs very little.

Read on for a quick primer…

END_OF_DOCUMENT_TOKEN_TO_BE_REPLACED

I’m making great progress, on the face of it. I’ve written 31,000 words — almost half the word-count of the average novel, according to some. I feel that I have made headway into the meat of the process  — the ‘middle’ of the story, as it were.

END_OF_DOCUMENT_TOKEN_TO_BE_REPLACED

The classic bicycle touring debate — trailer or panniers — has been running for almost as long as people have been going on bike trips.

There’s a reason for this. As with so many aspects of equipment choice for a cycle tour, there’s no right or wrong answer when it comes to choosing between a trailer or panniers for your luggage-hauling needs.

But there are a lot of opinionated voices out there. Having used both setups extensively, I’d rather like to bring a little objectivity to proceedings.

The truth is that whether or not a bicycle trailer is for you will depend on a variety of considerations. This article is intended to shed a little light on what might influence you to use a trailer on your next bicycle trip, and how to decide which of the many and varied cycle touring cargo trailers is right for you.

Benefits of a trailer on a cycle tour

The most common advocate of the bicycle trailer is the road tourer who needs greater-than usual luggage capacity. This is the most obvious benefit of the trailer — the ability to bring more than two sets of clothes, a slightly more spacious tent, and maybe a few home comforts for life on the road and at the campsite. Groups, families, tandem couples and long-term travellers often fall into this category.

The second main group of trailer enthusiasts is likely to be found in the off-road touring community. In this case, the manoeuvrability afforded by a single-wheel trailer in particular, together with the promise of shifting much of the luggage weight off the bike’s frame, are attractive selling points.

Some choose a trailer because of the ‘wow’-factor and the attention it generates, and this can be a blessing or a burden depending on your disposition!

But in general, if your tour is relatively short and confined to paved roads, and you don’t mind relinquishing a few creature comforts in favour of speed and low weight, a trailer is probably not for you. The two- or four-pannier setup is tried and tested, and perfectly adequate for the majority of people’s needs. Given how many cycle-tourists fall into this category, it’s unsurprising that the trailer debate is such a vocal affair!

But if you still think a trailer might be for you, read on.

Trailers can be broadly split across a small handful of categories, of which the first is the number of wheels the trailer has.

The distinction between single-wheeled trailers such as those from Extrawheel, BOB and Weber, and twin-wheeled models such as those from Burley or Carry Freedom, is largely a matter of handling and capacity. In general, single-wheeled trailers are more ‘natural’-feeling due to their ability to follow the bicycle along all three axes of rotation, and this is why off-road riders love them so much — they’re narrow and agile and don’t restrict the rider’s manoeuvrability when negotiating tricky terrain.

The Polish-made Extrawheel with its twin-pannier setup is quite the ‘phantom’ trailer when riding on-road; it’s barely noticeable (except for the extra drag when climbing hills). Off-road, there’s little better than the Voyager (EUR299). BOB’s popular Yak (USD319) and Ibex (USD399) trailers have a greater effect on handling due to their length, higher centre of gravity and wheel positioning, but can carry slightly more bulk — and all in a single dry-bag.

Two-wheeled trailers, usually with a flat-bed style cargo platform, are a better choice if you’re sticking to the asphalt and want to carry more than about 15kg of luggage, or excessively bulky items.

I once met a couple in the Middle East with a Burley trailer who were carrying (amongst other things) a full-size acoustic guitar!

The next major differentiation between trailers is the kind of cargo you want to carry. Most applications will make the best use of high-capacity dry-bags or panniers; all of the aforementioned manufacturers offer good solutions for this kind of use.

But some users have other needs — two-wheeled trailers such as the D’Lite to carry children are common sights on the roads and cycle paths of Europe, and trailers to haul canoes or pets are not unheard of!

Types of bicycle, and trailer compatibility

Which trailer is for you will also depend on your bicycle.

Lightweight road tourers and hybrids are built for speed and efficiency, at the sacrifice of a certain amount of strength, which will manifest itself in an abnormal amount of frame flex if you attach a trailer. This will lead quickly to metal fatigue and breakage, probably in the rear drop-outs.

Few bicycle frames are specifically designed for the stresses of a rear-axle trailer attachment, but you can up the odds by riding a converted mountain-bike or a touring-specific bike with reinforced rear-triangle tubing that has been built for the extra weight of a cycle-tourist’s luggage.

Wheel size is rarely an issue when mounting a trailer, as most manufacturers offer variants for different wheel sizes, or build one-size-fits-all solutions.

Disadvantages of trailers over racks & panniers

All trailers suffer from impracticality to some extent when it comes to transportation, and this is especially the case in Europe where restrictions on luggage size and weight are more strictly adhered to. Some models can be disassembled to a certain extent, and when planning your trip you’d be well advised to look into the practicalities of transporting your trailer to the starting point of your tour and getting it home at the end. When flights are involved — especially budget short-haul flights — this can become complicated and expensive.

Some manufacturers are working round this problem by introducing cargo trailers that double up as suitcases, and child’s trailers that convert into pushchairs. But if your trip includes a lot of overland travel, and you really must have a trailer — such as my recent trip to Mongolia which involved over 15,000km of train travel to get there and back — the best solution is slimline, lightweight, single-wheel options such as the Extrawheel, which, given an little ingenuity, can fit inside a bike box along with the bike.

A final point regards the longevity of the trailer. Most road tours of a few weeks or months won’t need to consider this, but in the long term, trailers with their relatively unusual components and constructions will experience wear and tear, just as your relatively commonplace bicycle parts will. When something fails, due to their non-standard nature, repair or replacement tends to be more complicated.

The answer is to play off the need for a trailer against the length of your trip. In general, if you’re considering a trailer for a long-term tour of more than a few months, I would look at only the most tried-and-tested of trailers, find out what’s likely to go wrong first and prepare appropriately, and reconsider the traditional pannier set-up just one more time.

All of these considerations aside, the most important thing is to go and enjoy your trip! Carrying luggage is a fact of life, but you can make it less of a burden by paying due attention to your needs well in advance, and choosing the most simple solution available — trailer or otherwise — so that you can concentrate on the wonderful experience that is a cycle tour.

This article was originally written for freewheelingfrance.com, a website set up to promote and advise about cycle touring in France.

While the media is hollering madly about civil unrest and revolutions, it’s time to remind ourselves that pretty much everyone in the region (and the world) is still going to work, drinking tea, and — of course — sharing meals with close family and friends.

My parents-in-law and many of their extended family live in Tehran, and I’ve shared countless delicious Persian meals in their company. Iranian is possibly my favourite cuisine of all.

Two bicycle adventurers in the UK are touring the world’s cuisines without ever leaving London. Here’s their short video from Iran. I’m salivating already…

If you liked that, check out their website at AtoZlondonfood.com.

New to this? Start with the massive advice & planning page, or perhaps the beginners’ ebook. Otherwise, feel free to have a browse. Welcome!

* What does this mean?

Buying via affiliate links helps me keep my content 100% free. Find out more about how this works.